On the whole world there are power-, and ritual places which since ancient times have given people access to the so called other world as well as to the energies that are in conjunction with stars. The indigenous peoples of this earth used these places of power to celebrate festivals and rituals, following the annual cycle. Also the Alpine regions are full of such places and on most of them today have been built churches to put an end to the so called paganism. The heathen as well as all the indigenous people perceived this planet as ‘Mother Earth’ and they lived in accordance with nature, all its inhabitants and the spirit world. Through the rediscovery of these power places and energies, we can come to realize that the whole world is a sacred place that should be appreciated as such.

Some examples of such places:

Almost twenty years ago, I began together with other people, to visit places of power to direct energies there. We cleared and cleaned houses, places, villages and issues that affect South Tyrol and we cleared, set free and brought into flow energies. South Tyrol has many hardened structures that are marked by fear, a fear that is the result of and that is expressed in society systems that have been build up over the last 200 years upon undigested history. Since everything is connected to everything, these issues and fears radiate out of our systems and in turn, find expression in the entire energy field of South Tyrol. Topics such as distrust, fear of being sold and betrayed or fear of openly and freely expressing one’s own opinion. These are just a few examples of themes that have blocked the flow of energy and that provoked a holding onto matter. As a result thereof, many souls could not let go of the earth plane and thereby causing a veritable network of arrested souls that hung like a cloud over the country which expressed itself through the feeling of heaviness.

Over the years, many groups of different spiritual directions, as well as individual people have brought these souls into the Light. People and groups that are willing to repeatedly visit these power places to celebrate rituals, to bring healing and to bestow the beings of nature are wonderful . Each group, but also each individual person adds their part to the recovery of the original purpose of every place or village. Also through this work, blockages linked with the country’s history have been released.

However, there is still a lot to do and I hope that people remember and or find back their roots. Only those who have strong roots, can approach life and other people with full openness without fear of loosing something or the need to protect themselves against something. This knowledge should always be passed on to the next generation. In our country we are faced with two completely different cultures that regularly need to be brought into harmony and balance with each other. It’s a great opportunity for both sides, and both parties should contribute equally to build a unity.

The Earth has now completed the ascension process into the fifth dimension, there already have been changes and things will continue to change. Therefore it is important that we start looking over the borders of our country in order to recognize the Earth as a wholeness and in it the unity of all being. The theme of the consistent to new world in creation is unity, for all that separates there’s no more place. When issues of the past are still occupying you, then you are invited to bring these into healing in a way that suits you so that you can become free in and to the present moment. The more people that harmonize with themselves, the more the whole Earth will be in harmony. By taking up personal responsibility we take further responsibility for our planet. 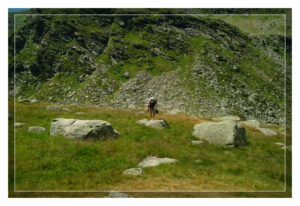 Sprons is my second home, many summers of my childhood I spent there. For me it has always been a very special place to which I felt magically attracted. The great thing about this valley is that the rise is very steep and therefore many people steer clear of the place.

A friend told me about the existence of an ancient Sun worship place in this area, this must have been in 2004. And so we agreed to explore the area together.

We started from the Tyrolean cross into the Longfalltal , the way I was accustomed to do in my youth, though there are several other routes leading into Spronsertal as well. That day it was exceptionally hard to move forwards and when we reached the level that bears the name ‘Form’, we just had to make a stop because progress seemed almost impossible. I connected myself with the place and a lot of little Gnome with red caps presented themselves and they told us that the entire area, the valley itself and the surrounding mountains, was a holy site to them. For that reason they make sure that not everyone hikes up there by making the climb very difficult. They want to protect this place and to save it from exploitation. We declared our intentions to the Gnomes and asked permission to enter into their realm, they were well-disposed towards us and we left them treats, which I think were nuts and raisins and from that moment walking onwards went much easier.

This Sun worship place is located at Pfitscherjoch, very near to the ‘Oberkaseralm’ and nowhere have I seen so many bowl stones as can be found here. Unfortunately only one single sign indicates the fact that these pre-historic bowl stones are there. I have observed that most people walk upon these stones without realizing what they are.

In 2005 we initiated a healing session of the energies in this area which was specifically about the reconciliation of male and female aspects in us, in the landscape and generally in this time.

About the wonderful pictures that revealed themselves there to me, I prefer not to go into further detail now as that would be beyond the scope of the context. Before and during the healing work, it felt as if we were in another dimension, it resembled a time shift. In the meantime a stocktaking of the bowlstones has been made and a wonderful leaflet about them can be obtained at the Oberkaser Alm.

The Narauner hamlet is located in the so called Sautatele. St. Hippolytus is a pre-historic site. Already in 18911 there were excavations here with finds from the Neolithic and Bronze Age, Neolithic Age, Neolithic 4000-1800 BC.

Right at the beginning of the trail is wonderful almost Mediterranean vegetation, with wild cacti on reddish porphyry. This distinctive landscape feature was probably also the namesake for the ‘Cactus settlement’ lying nearby. It appears to be as well an ideal area for snakes and therefore one need not be surprised that the so called ‘snakefarmer’is located nearby.

On the edge of the paved part of the trail, is the legendary ‘oil knot’, which one easily passes by unnoticed if one is unaware of its whereabouts. ‘Oil knot’ is called thus because the water that came from the source, worked somewhat oily and had healing properties, especially against stomach ailments. Just above from there, the church of St. Kosmas and Damian can be found, which apparently is located on private property and can only be viewed from the outside. This church was build to devote sanctity to the source of the ‘Oil knot’ and also to emphasize the power of the church over that of the Roman Empire, because underneath the present church of St. Kosmas and Damian used to be a Roman temple.

The road to the castle is very old and original, and after a while our in the meantime trained eye notices to the right of the path, the remains of walls of former residential pits, probably dating back to the Neolithic or the Bronze Age. Then we finally reach the castle, which stands on a rock that has served as a place of worship. The energy there is very clear and bright and is supported by ease; I saw pictures of people who were dressed in light and white, worshipping their Gods and Goddesses. It was used as a place to meditate, especially then when it concerned physical ailments or diseases, to obtain a holistic picture or even to communicate with the body and to receive answers from the deities. There was a guardian of the place who mediated between the Gods and the humans. Communal festivities were also celebrated here.